Planning began in 1987 and construction started in 1990.  Individual contributions, both from within and outside of the country, kept the project moving forward during the two-and-a-half-year construction period.  The school opened on 31 January 1993 with 65 students and by inauguration day in 1996, there were 120 students.  These years also saw the development of a library, a multimedia computer lab, a swimming pool, and the purchase of a school bus.  The school has attracted staff from Australia, Canada, DR Congo, India, Malawi, South Africa, Uganda, the United Kingdom, the United States, and Zimbabwe, in addition to its core Zambian teachers.  The school has attracted students from Christian, Muslim, Hindu, Buddhist, and Bahá’í backgrounds with its universal, global outlook that encourages respect for all cultures, races, and religions.

The School’s motto “Let Your Vision Be World Embracing” has been expressed through both its academic and social curriculum designed to assist the students to develop a vision and awareness of the needs of an increasingly complex world.  Emphasis has been placed on the importance of acquiring virtues and living a moral life – a spiritual education found in all faiths. The School was named after Mr. Músá Banání who was the first individual to bring the teachings of the Bahá’í Faith to the continent of Africa. 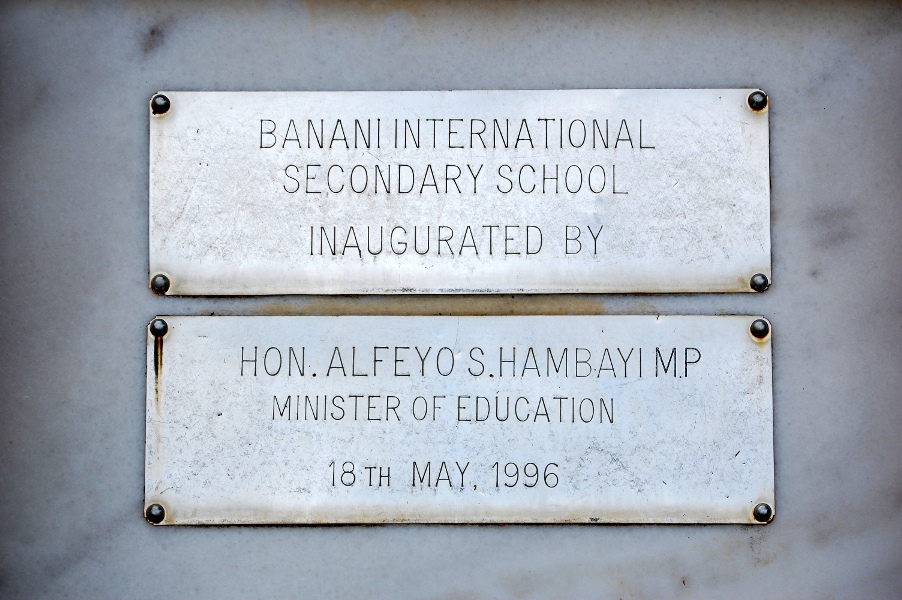 Banani School was officially inaugurated on 18 May 1996 by the Minister of Education, Hon. A. Hambayi in conjunction with Mr. Kiser Barnes, member of the Bahá’í International Teaching Centre, Counsellors Mrs. Lali Warren and Dr. Firaydoun Javaheri, with Mr. Hasan Sabri of the Office of Social and Economic Development.  The principal supporters of the school, Dr. Faramarz and Mrs. Bahiyyeh Ettahadieh from Austria, were also present.  Among the 300 people in attendance was special guest Mrs. Bahiyyeh Winkler of South Africa and others involved over the years with the Board of Directors, the Youth Year of Service programme, the construction and engineering teams, and other areas of service.

The programme was graciously chaired by Counsellor Warren and many inspiring speeches were made on the progress of the School, the vision of Bahá’í education, the importance of educating girls, and the Ministry of Education’s policy of encouraging such private ventures in Zambia, especially for the girl child.  A moving letter addressed to the gathering by the late Mrs. Banani, who passed away shortly before the event, was read by Mr. Sabri.  The speeches were interspersed with presentations by the Banani School Choir, Drama Group, and Dance Workshop.  The events of the day befittingly inaugurated what had already become one of Zambia’s top secondary schools.

The Primary School was inaugurated on 22 August, 2001 soon after completing the construction of a one classroom block. Dignitaries present at this memorable occasion were Mr. Ali Nakhjavani member of the Bahá’í House of Justice as guest of honor and Mrs. Violet Nakhjavani. Others included Dr. Firaydoun Javaheri member of the International Teaching Centre and Counselor Garth Pollock. Also present were Members of the National Spiritual Assembly of the Bahá’ís of Zambia, Directors of the William Mmutle Masetlha Foundation Board and the first Head of Primary Rosanna Mastromonaco from Canada who returned to Zambia to assist with the Capstone project. About 100 people including parents of the 14 pupils, Bahá’ís from Congo and various parts of Zambia came to welcome Mr. Ali Nakhjavani and witness the inauguration. Recognized in absentia was the Maghzi family from California who generously donated funds for the construction of the classroom block.

The guest of honor, Mr. Ali Nakhjavani addressed the audience about the significance of Bahá’í Education. After the inspiring speech from Mr. Nakhjavani, pupils sang songs to entertain the gathering. Later Mr. Nakhjavani encouraged the pupils to adorn themselves with praiseworthy character.